LEFT: Land at the headwaters of the Whitewater River’s South Branch is again wet prairie. CENTER: At that site Marlis Knowlton, Eyota City Clerk, tells how citizens and City employees established the prairie, and how the City and DNR are collaborating to continue the work. RIGHT: At Summerfield Park, a sunny playground is now bounded by a beautiful rain garden built by volunteers.

Iris Neumann has a funeral to attend and can’t stay long, but she  spreads clearly written notes, project records and a rain garden design sketch on the table. The Eyota resident smiles, then graciously introduces two City projects in which she’s had a hand.

On Eyota’s north side, Summerfield Park is situated at the blunt end of Summerfield Drive NE in a relatively new neighborhood development. The well-kept “pocket park” is a popular place for neighborhood kids, but in 2010 was hot and open. Eyeing clay-based soils and standing water, the Park Board decided to install a rain garden to hold and filter nitrates from runoff and create a more beautiful environment. Ms. Neumann developed a plan, then with contractors, Park Board members and the park’s next-door neighbor Dianne Schmidt, the garden was graded, planted, and mulched.

A prairie restoration in Eyota’s West Side Park began when Park Board members saw opportunity in a wet, low place in the park’s sprawling lawns. That seasonally soggy spot is the source of the South Branch of the Whitewater River—a collecting place for runoff from roads and nearby farm fields that begins to flow just across the road from the park. Determined to give the stream a cleaner start, the Board developed a prairie restoration plan in 2006, then spent two years ridding the site of existing vegetation. In 2008, with leadership by Tom Eckdahl, manager of nearby Chester Woods County Park, the prairie was planted with hand-collected seed from Chester Woods’ prairie and Winona County’s Prairie Moon Nursery. Now, five years and several burns later, the prairie is a thick, natural area that filters nitrates and other pollutants from water and attracts both birds and people. 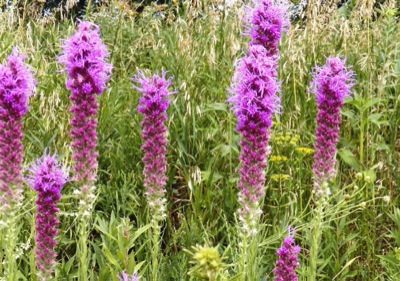 From the list of plants donated to the City of Eyota by Chester Woods Park:

Marlis Knowlton, City Clerk, says Eyota has runoff issues because its prairie landscape includes a surprising amount of clay. As the City looks to resolve persistent water issues, these two projects may inspire larger scale work at the source of the Whitewater River’s South Branch.