Water moves down from high hills to low valleys, over natural areas and places made by people.

Think about your local creek or river. Where does it start? What kind of land does it flow through? Where does it end up? All of the area covered is a watershed.

Watersheds can be as small as a back yard or very large. The Mississippi River watershed (basin) covers 1.2 million square miles or about 40% of the lower United States. Minnesota has 10 major river basins, some of which reach into neighboring states or Canada.

Whatever their size, watersheds are important because they move our most precious resource and supply us with water for drinking, recreation, agriculture and industry. Lakes, rivers and wetlands in watersheds support us and countless species of animals, insects, fish and plants. 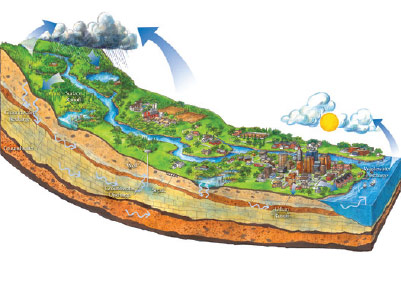 Water moves in a cycle.

Rain and snow fall on everything, then sink into the ground, run to the nearest stream, or evaporate into the air as part of the water cycle. Water that doesn’t evaporate moves down into larger and larger bodies of water.

A watershed is “that area of land, a bounded hydrologic system, within which all living things are inextricably linked by their common water course and where, as humans settled, simple logic demanded that they become part of a community.” — John Wesley Powell, scientist geographer and second director of the U.S. Geological Survey, who led early work to map the nation